Things to Do in Washington, D.C.

A host of new restaurants, hotels and entertainment venues in the nation’s capital are just now spreading their wings.

Visitors are back in Washington, for all the reasons they came before.

Gaggles of school groups and tour buses are on the National Mall, enjoying the green space and the museums. Demonstrators are marching. Convention centers have 19 large-scale events scheduled this year, with the largest — booked by the Association of the United States Army nonprofit — anticipating as many as 30,000 attendees.

The city has yet to fully rebound from the coronavirus; the number of international visitors is not expected to reach prepandemic levels until 2025, according to Destination DC, the district’s official marketing organization. But timed entry passes to favorite sites and reservations at coveted restaurants are vanishing quickly, and many local businesses and attractions, which spent the last two years reassessing operational practices and evolving, are now seeing results from their planning.

These are some of the new hotels, restaurants and events that visitors can expect to encounter.

New dining in every style

Albi was welcoming diners to take in its stunning wood-burning hearth and Middle Eastern flavors for less than three weeks when the World Health Organization declared the coronavirus a global pandemic. This year, the restaurant in Washington’s Navy Yard received a Michelin star, proving its staying power and the prowess of its chef and owner, Michael Rafidi.

A meal, which the menu describes as “a journey through Levantine cooking,” ($95 per person) includes rotating seasonal choices as classic as the fire-charred baba ganoush or as fun as chermoula-covered bass served with lump crab meat. Mr. Rafidi’s Yellow cafe sits next door and slings more takeout-friendly options like pita sandwiches and savory pastries dusted with za’atar or harissa.

In downtown Washington, which was badly hollowed out by a prolonged lack of workers, the regal design work in the dining room at Shoto seems to remind everyone that even in an area packed with drab offices, they are still in the nation’s capital.

The creators behind Shoto clearly paid as much attention to its décor as to its thoughtfully crafted Japanese haute cuisine, with every table placed near some spectacle, whether under a hanging ornament of rock from an active volcano in Japan or facing the ornate sushi counter and bar.

Shoto features two tiers of omakase for those aiming to sample the range of its menu (one for $115 and a premium step up for $195). For anyone else who prefers direct control over dinner, they also offer a vast assortment of sushi, tacos (from $8 for salmon to $19 for premium Wagyu) and robatayaki, a style of charcoal barbecue applied to everything from grilled tiger prawns ($39) to an Australian tomahawk steak ($295).

In September 2020, as remote work became standard, the Roost arrived with a 12,500-square-foot food hall stuffed with an excellent selection of vendors but still offering plenty of breathing room. The Roost, which describes itself as a “culinary clubhouse,” has cushioned booths and secluded alcoves that are ideal for long visits and private conversations. As for food, one can find a pork belly poutine ($11.50 from Red Apron), beets with smoked trout ($14 from Leni), crispy avocado tacos ($7.50 for two from Hi/Fi) or 50 beers on tap at Shelter.

But even many months after restaurants could open fully, the long hangover of the pandemic has continued to stalk small, independent restaurants.

In January of this year, lagging business led to the closure of Thamee, a Burmese favorite that had won the attention of locals and national food publications alike with pickled tea leaves and turmeric-smeared steamed fish. In July, a similar announcement came from the owners of Bad Saint, a deeply cherished Filipino gem whose owners cited the changed business environment in explaining their decision to close.

Washington spent the last two years in a building spree, bringing flagship hotels and a wealth of new high-end accommodations.

Part of the frenzy has been tied to a larger drive to dramatically reshape the area around the city’s southwest waterfront and the Washington Navy Yard, which is seeing a concurrent explosion of designer shops and restaurants.

The Cambria hotel in the Capitol Riverfront area (rooms from $178) and the boutique Pendry hotel at the Wharf (rooms from $405, opening in November) now tower over the confluence of the Potomac and Anacostia rivers in Washington’s southern end. Both add capacity near a district where the city recently invested $2.5 billion to correct a botched effort at urban renewal and transform the waterfront into a commercial area with tourist-friendly establishments and a performance venue.

The newest of Washington’s three AC Hotels by Marriott (rooms from roughly $200), close by in the Navy Yard, has also become popular thanks to its all-weather rooftop bar, Smoke & Mirrors, which offers a superb, unobstructed view of the Capitol.

Moving away from Washington’s generally prim and staid options, Selina (standard rooms from $109), an independent brand that openly caters to millennial and Gen Z travelers, also opened a location in Union Market in June. The hotel offers guests co-working spaces, wellness classes and experiences like live concerts and group excursions in a way that appears to blend traditional hospitality with backpacker and hostel culture.

In all, eight new hotels have opened or are on schedule to in 2022 alone, bringing with them more than 1,200 additional rooms.

The first year of the pandemic was a time of mourning for many in Washington’s music scene, as initial shutdowns became permanent for some of the city’s older and more celebrated venues.

Among the biggest losses was Twins Jazz, a storied club founded by Ethiopian migrants in 1987 in the city’s U Street corridor. Just a few blocks away, the Velvet Lounge, a dance hall known for its all-embracing performance calendar, folded some months later.

Many feared the worst when a similar announcement came in 2020 from 18th Street Lounge, a beloved nightclub that operated for 25 years in Dupont Circle.

Through some resolve and popular demand, 18th Street Lounge kept its name, but took up new digs on 9th Street beside other bars and restaurants occupying Blagden Alley, a back street once singled out by Eleanor Roosevelt and other New Deal reformers as an emblem of the city’s urban decay, but now lined with trendy shops.

At its original location, Songbyrd became a Washington staple after hosting artists such as Khalid, Jessie Reyez and Tyler Childers when they still routinely performed for 200-person crowds.

“I know that bands we have playing here now, today, will be the ones going on like that,” Mr. Lapan said.

Last year also saw the launch of Capital Turnaround, a multiuse entertainment space built inside the castle-like structure of the former Navy Yard Car Barn, which was once used to flip streetcars on a track running from the Navy Yard to Georgetown.

Though the pandemic held up its debut, the building fits an 850-seat main stage, which has already hosted a mix of comedy shows, live podcast tapings and musical acts, and seems well positioned to complement the city’s other midsize venues and theaters that are largely concentrated in other areas.

Museums reoriented toward the future

Washington added to its famously rich collection of museums and monuments in 2020 with the launch of Planet Word, a novel museum focused on language and speech (free admission with a suggested $15 donation).

The pandemic took a toll on Washington’s longstanding museums, with some like the National Portrait Gallery and the Smithsonian American Art Museum closing down twice in 2020, and others significantly scaling back hours because of staff shortages and other safety concerns. The Smithsonian network, whose 17 free museums and galleries in the Washington area slowly reopened last summer, saw attendance fall to 5 million last year from nearly 30 million in typical years.

But closures have also provided time for many museums to forge ahead on needed renovation work and install highly anticipated exhibitions, strengthening the city’s museum system with a range of improvements and updates.

The National Gallery of Art used the downtime to modify its guiding vision, and emerged from the pandemic with a fresh brand and a goal of increasing its relevancy by diversifying its collection and staff to better represent the country’s demographics.

This fall, the Air and Space Museum will have a dramatically redesigned west wing, unveiling eight exhibits including one on lunar exploration and another on the Wright brothers.

The Renwick Gallery, which closed for several months this year to install work for its 50th anniversary celebration, reopened in May. The anniversary exhibition, “This Present Moment,” is the culmination of a campaign started in 2020 through which the museum acquired more than 200 crafts by American artists from underrepresented backgrounds.

And while the Lincoln Memorial persisted throughout the pandemic as a conveniently open-air space, accessible at all hours, visitors may also notice some extra shine.

In preparation for the monthlong celebration of the memorial’s centennial in May, the site was refurbished with a new roof and other cosmetic touch-ups as part of an ongoing long-term rehabilitation effort.

Labor supply in hospitality sector is "very tight" given wag... 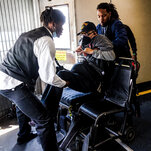 Embarrassing, Uncomfortable and Risky: What Flying Is Like f...